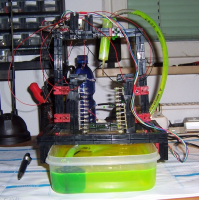 In August 2006 a friend sent me a link to the time fountain, a project which really amazed me. It took me and my friend Michele Collodo 2 months to check out how to create nice big drops which drip very fast. We used a spraying device with twisted, thin wire in it. In the mid of November 2006 the first prototype worked fine. It could freeze one or more drops on one axis in the air and let them jump up and down. The falling drops were recognized by a light barrier. 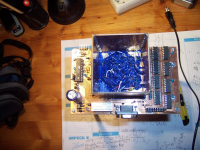 At the end of November I had the idea to build up the same set-up multiple times to create 3D instead of just 1D images. Hartmut Schott helped me to design the mechanics and the electronics. He created a schematic diagram and a board layout. In December and January he and my brother Timon Seidl assembled the whole arrangement with little assistance from me. I wrote a software in the C language. The hardware consists mainly of an ATMEL mikrocontroller, a part where the water drips out and some measurement system to detect when a drop loosens. This has to be measured for each drop seperately, because the drops do not drip out at exactly the same interval at all 25 holes. 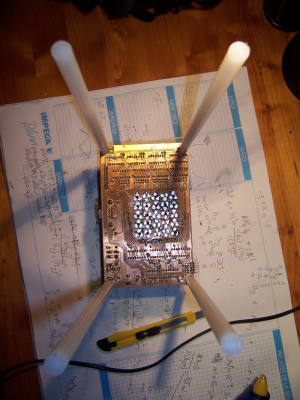 25 groups each consisting of 3 UV LEDs (to increase light intensity) and one pin, the water ran down on the pin.

We first planned to let the drop fall out between the groups of 3 LEDs. There was one pin between the LEDs where the water could ran down. The pins were isolated except 2mm right at the end. The water was used as one electrode, the pins as another. When the drops loosened, the resistance between the water and the pins grew. Poorly, the difference was not big enough for a good measurement. The pelvis was mounted right on the board, the electronics were protected by blue varnish, so they should have stayed dry. As we found out, the varnish was not water proofed… Instead we tried hot-melt adhesive then. We did not think of the heat of the LEDs — when they were activated, the lost heat was so big that the hot-melt adhesive got a bit fluid and the water caused a short-circuit on the board. 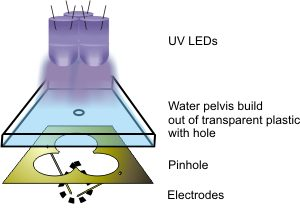 The falling water drops lead to an electrical contact between the two electrodes, so that the LED strobe lights can be synchronized.

To get a better measurement we used two diagonal pins then, which were connected by a falling drop. The difference in resistance is much higher with this method. Instead of a pelvis which is mounted on the board we used an extra water pelvis made out of transparent plastic, with 25 holes in it, where the water dripped out. There were no problems with wet electronics anymore and it looked cooler ;) To minimize the diffusion of the LEDs, a pinhole was mounted underneath the transparent water pelvis.

Poorly, the small holes where the water dripped out clogged easily, so no more water could get out. In addition, the drops came out at very different speed, some very slow, some too fast. This lead to a third prototype…

The third prototype should light the drops not from the top, but from left and right. This is because there is no more space for LEDs at the top, in the water pelvis there sits a more complex mechanic now. It consists of five tubes, connected by gear wheels to one electric motor. Each tube has five holes in it. If the holes of one tube show to the bottom, water can flow inside the tube and drip out at the five holes. Because the tubes spin very fast, and only the holes of one tube show to the bottom at a time, there should drip out five drops out of the first tube, then five out of the second tube, and so on. The LEDs can then light each drop separately, because each row of five drops is at one height.

Poorly, even this system does not work fine: The drops do not fall out of every hole when a tube shows to the bottom. 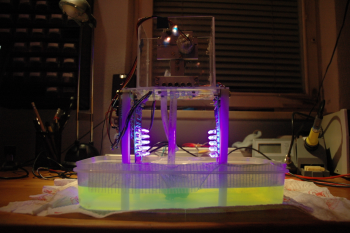